An evening in Maremma

The men loaded into the Land Rover to cover maybe ten kilometers of heavily rutted double track, the red clay of Tuscany, heaved by months of freeze, porous and ruptured, then grooved by the first venturing jeeps of spring. The Rover’s heavy suspension came alive as Marco powered us over the broken ground, following the deep tracks of vehicles that must have wallowed and high-whined through greasy clay, farmers revving among these remote emerald pastures, their mud boots splattered and drying on the floorboards of trucks and tractors pushing through winter’s waning wet hold on the ground. These were the back roads.

Marco had straightened up, leaned in to the conversation the night before when he heard the bits and pieces of table conversation that revealed my passion for country side and its wild boarders. So plans were made to eat at Fontanile Dei Caprai, a rustic eatery in this remote pastoral landscape of the lower Maremma, and four of us were headed there now, the back way: Marco, Paolo, Jacopo and me. Bouncing along, Marco and I laughed when we discovered that I’m five days older than he is.  From the back seat, I rested my hands on his shoulders, feeling close to him.

We drove along a small herd of Maremmana, the dapple-grey long-horn beeves native here in the marshy coastal region of lower Tuscany. They watched us as we passed out of that back country and came in sight of a paved road and the osteria. Low slung roof, hand-cut and hewn post and beam, it looked like a loafing shed from long ago that had been cleaned out and straightened up, its walls framed mostly with glass to look out at the green swells of pasture, the wood framed doorway varnished dark, warm yellow light coming from inside. The proprietress was a heavy-shouldered older woman, handsome in country ways, with her slim young daughter and a stout older girl in an apron watching from the kitchen. Vera, Marco’s wife, met us there.

The specialty of the house is cingale, wild boar, slow cooked with tomatoes and wine in a dutch oven near wood flame, with boiled potatoes and rosemary. We ordered it, and roasted pork and roasted rosemary chicken.

Before the cingale, we picked from a platter of sliced salami, capocola and a smoked sausage, and olives. Sitting outside under the low shed roof, we drank wine and ate meat and olives and last fall’s olive oil with crusty bread, and watched night pour over the contours of field and forest’s edge. A strange bird whoooed; Vera thought it the assiolo, a small owl of pine forests. There were islands of easy conversation, surrounded by the quiet of sitting together and watching the night come to us.

We tasted two versions of morellino, the west-country name for sangiovese: one, bottled and labeled by a new winery next door to the restaurant, it’s buildings so freshly planted and awkward on the landscape that the locals regarded it as a poor intrusion. The other wine came to table in a small glass carafe, the product of much less elaborate efforts down the road. The more rustic wine, lighter in color and perfume, had the delicate touch of bruised rose petals on my tongue, and tasted more of open air fermentation, the dark juice lightened by airborne yeasts and the soft atmosphere of wild herbs. The bottled wine offered a more conventional expression of sangiovese, closed and confined, with the familiar roundness of wood. I prefered the homemade, the difference between a florist’s expensive arrangement and a bouquet of wild flowers.

Before the cingale arrived at table on this night in early spring, we ate a soup of farro, lentils, carrots and celery. Thick, creamy with the starch of long-cooked grain — molto saporoso — rich-flavored. We drizzled it with a thin stream of green olive oil and thickened it with bread scraps. Nobody spoke, just the spoons tapping against the dark ceramic bowls.

The boar was delicious: the result of long slow cooking of wild meat, the strings of sinew softened and saturated with tomatoes, wild herbs and wine. More bread to clean our plates before tasting the fat-rich pork roast and glistening chicken.

Dinner ended with vin santo, the lighter northern Italian version of amber dessert wine (at Tappi we serve malvasia, a heavier golden raisin wine native to Sicily) and cannucci, the low-profile almond biscotti that’s been married to vin santo for centuries. Dip the cookie in the wine, stir it up, and enjoy the infusion crunching between your teeth. 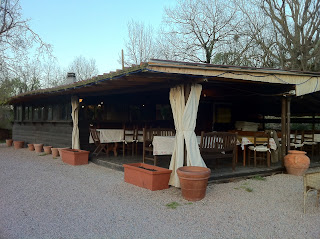 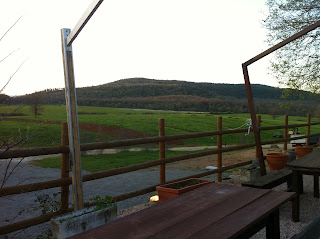 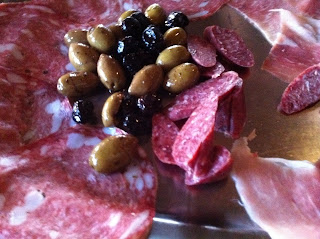 Posted by john@tappi at 1:44 AM No comments:

A hidden jewel, a private showing

I met Sabina in front of her namesake church in one of Rome’s oldest neighborhoods. She is a friend of my friend Paolo; he told me that she would introduce me to one of the most important projects in the city.

The Aventino is one of Rome’s seven hills, a quiet and dignified collection of high walled gardens, stately homes and three of the city’s most historic churches on the south side of the Tevere, in the southern quarter of the city. The U.S. Ambassador lives there among some of Rome’s most illustrious families.

My guide met my taxi in the shade of Chiesa di Santa Sabina, the historic headquarters of the Dominican order built on foundations laid in the year 422. She spoke to me in Italian as we walked quickly to a modest side door in an old red brick building. She used a key from a rattling bunch to unlock the entry, and we passed into a narrow hallway that smelled of damp underground and fresh plaster. It was a utility corridor, barely wider than my shoulders, lined with masonry buckets, electric conduit and a control panel of breaker switches.

She flipped a toggle. A series of overhead naked bulbs flickered awake in the passageway that sloped down and around a curve. I followed her to the top of polished steel, open-grate spiral stairs, very narrow and steep, and we descended in a tight turning forty feet to the chamber below.

Just the two of us, there in a room where people lived more than two thousand years ago.

Sabina restores ancient buildings. Thirty years ago she graduated from a rigorous four year program in antiquities restoration. And she has been caring for her city’s treasures ever since.

This chamber is her latest project. It is part of a house built during Rome’s first incarnation. It was discovered just before the second world war as workers were constructing a new house on the site; digging the foundation, they broke through the long-buried ceiling into the entombed space below.

The chamber was hardly explored. At that time in Rome, such discoveries were not uncommon. The find was recorded and nearly forgotten for more than thirty years until state curators, in a methodical review of the city’s historic sites, began the process of acquiring the property.

In Italy, public funds for restoration work is spread thin. You can imagine all the historic sites and monuments that wait for attention and care. This small house, a jewel of frescos and marble pillars, is one of Rome’s most modest properties.

I’ve never been in a church, walked a battlefield, or paused on a mountain pass, and felt more hallowed atmosphere than I did in that chamber. The room’s air feels expectant, as though waiting for its family to return. There was, for me, a similar feeling: as though down a passageway might come the echo of everyday life, a laugh or children’s running or a muted conversation. 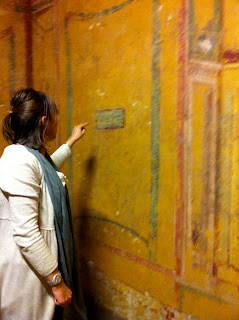 Sabina at a frescoed wall 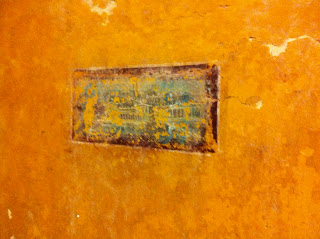 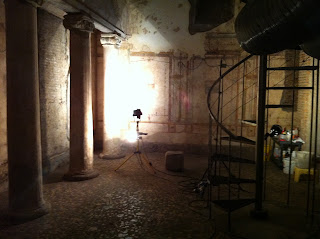 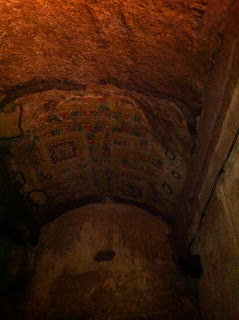 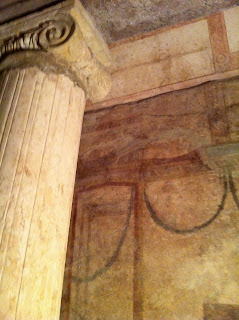 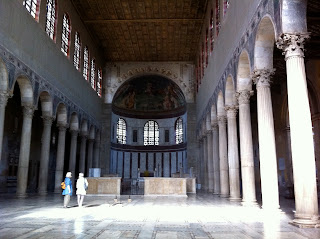 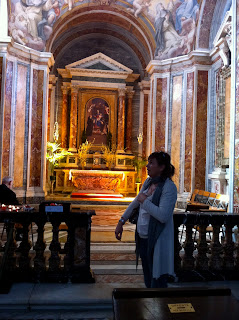 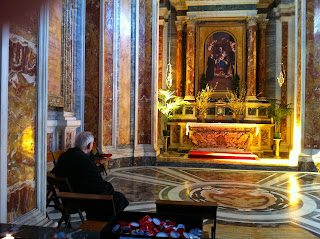 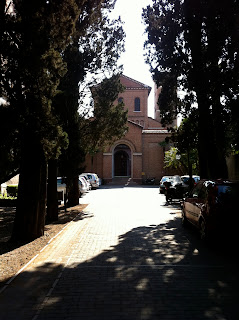 Sant Anselmo
Posted by john@tappi at 1:54 AM No comments: